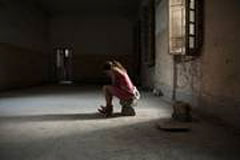 Naples: a girl and a boy in a huge abandoned building. Veronica has snubbed the local camorra boss, but it’s unclear exactly what she has done to be locked up in such a frightening place. Salvatore has nothing to do with the camorra, was forced to play the jailer. As the hours go by and the hood fails to appear, Veronica gradually leaves her initial hostility towards Salvatore behind. But Veronica’s punishment could arrive at any minute and it’s sure to be terrible.