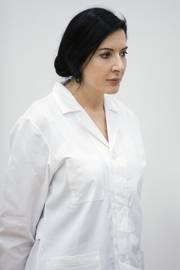 Fondazione Furla will present Giada Colagrande’s latest film “The Abramović Method” as a special event in Venice within the Venice Days section. The film was produced by Art + Vibes in collaboration with Collateral Films and with the support of Fondazione Furla.

The film documents the first time Abramović’s method was enacted and follows the mental and physical transformations of participants in this experiment triggered by the direct relationship with the artist and the experience of the performance.

In the artist’s intention, the film itself becomes part of the method, fixing it in time and enabling her to share her method widely.

“The Abramović Method” is a new episode in the collaboration between Marina Abramovic and Giada Colagrande and their joint return to the festival after last year’s presentation of the documentary “Bob Wilson’s Life and Death of Marina Abramović”.

Marina Abramović was the spokesperson for the Furla Award 2009, named by her “The spirit in any condition does not burn”. In this new collaboration, she explores the transformative power of performance art and the importance of the rapport between artist and audience.

The film was shot from March 21 to June 10, 2012 at PAC Padiglione d’Arte Contemporanea di Milano, when Marina Abramović for the first time applied her method to herself and the public in the context of a show / performance curated by Diego Sileo ed Eugenio Viola, with the support of the Assessorate of Culture of the City of Milan and produced by PAC Padiglione d’Arte Contemporanea and 24 ORE Cultura - 24 ORE Group.

Just like in the original performance, the artist will revive her method in Venice through the images of the film over the course of three special-invitation screenings introduced by Marina Abramović and the director that will take place on Friday, August 30, at the Villa degli Autori (Villa Zavagli).

“In my experience, grown over my forty-year career, I have arrived at the conclusion that the audience plays a very important, even crucial, role in performance,” say Abramović. “Without an audience, a performance is meaningless because, as Duchamp said, it is the audience who completes a work of art. In the case of performances, I would say that not only are performer and audience complementary, but almost inseparable.”

“We are very happy to support the realization of this project because we feel very much connected with Marina, an extraordinary artist and a great human being. We also feel certain that the great sensibility of a director such as Giada Colagrande will make it possible for a far greater number of people to experience and reflect upon the Abramović Method,” adds Giovanna Furlanetto, President of Fondazione Furla.

The Abramović Method is based on ideas that Marina Abramović has developed from her last three performances: The House with the Ocean View (2002), Seven Easy Pieces (2005) and The Artist is Present (2010), works that have deeply conditioned her way of perceiving her own work in the relationship with her audience.