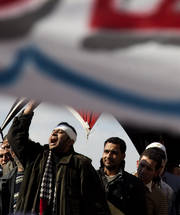 From facebook thumbs up to the battle of stones, a history of hope, fear, despair, anger, pride and elation, Tahrir is the real-time chronicle of the two most exciting weeks in the history of modern Egypt as lived by their protagonists.

Since the 25th of January, together with thousands other Egyptian citizens, Noha, Ahmed and Elsayed have been involved in a massive movement of street protest for political freedom. By the end of the first week of urban guerrilla and brutal state reprisal it has become nothing less than a revolution to overcome Mubarak’s regime. Day after day, sleepless night after sleepless night, until the capitulation of the defeated pharaoh, the film follows these young and unexpected heroes along their fierce fight to win their liberty.