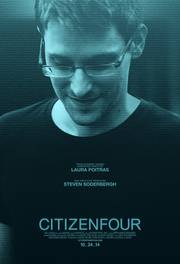 CITIZENFOUR, Laura Poitras' highly anticipated film about worldwide mass surveillance revealed by Edward Snowden is opening in Europe and the United States this fall. CITIZENFOUR is the final film in Poitras' 9/11 trilogy, following the Academy Award-nominated My Country, My Country on the Iraq War and Emmy-nominated The Oath about Guantánamo.

In January 2013, Laura Poitras started receiving encrypted e-mails from an anonymous source identified as "citizen four", who claimed to have evidence of illegal covert surveillance programs run by the NSA in collaboration with other intelligence agencies worldwide. In June 2013 she and reporters Glenn Greenwald and Ewen MacAskill flew to Hong Kong for the first of many meetings with the man who turned out to be Edward Snowden. She brought her camera with her. The resulting film is a real-life thriller, unfolding minute-by-minute before our eyes.

Laura Poitras' films have premiered at festival worldwide. My Country, My Country (2007) was nominated for an Academy Award, an Independent Spirit Award, and an Emmy Award. The Oath (2010) won the Sundance Cinematography Award, Edinburgh Film Festival Documentary Jury Award, and a Gotham Award for Best Documentary. Additional honors include a Peabody Award and a 2012 MacArthur Fellowship.

Poitras has taught filmmaking at Duke and Yale universities, and in 2012 her work was selected for the Whitney Biennial. She will have her first solo exhibition at the Whitney Museum in 2016.

She is a co-founder of The Intercept, along with Glenn Greenwald and Jeremy Scahill.