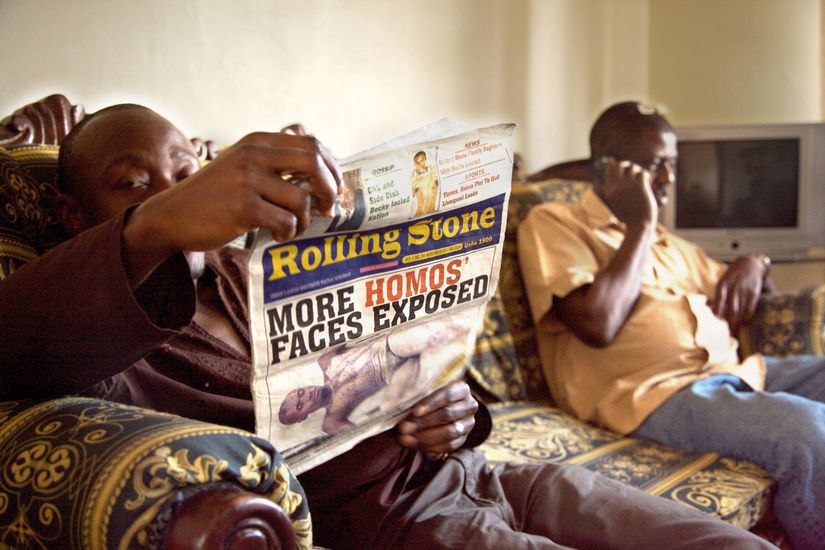 In an unmarked office at the end of a dirt track, veteran activist David Kato labors to repeal Uganda’s homophobic laws and liberate his fellow lesbian, gay, bisexual and transgender men and women, or “kuchus.” But David’s formidable task just became much more difficult. A new “Anti-Homosexuality Bill” proposes death for HIV-positive gay men, and prison for anyone who fails to turn in a known homosexual.

Inspired by American evangelicals who have christened Uganda ground zero in their war on the “homosexual agenda,” the bill awaits debate in Uganda’s Parliament. Meanwhile, local newspapers have begun outing kuchus with vicious fervor under headlines such as: “HOMO TERROR ! We Name and Shame Top Gays in the City.”

David, Uganda’s first openly gay man, is one of the few who dare to publicly protest state-sanctioned homophobia. Working with an idiosyncratic clan of fellow activists, David fights Uganda’s government and tabloids in the courts, on television, and at the UN . Because, he insists, “if we keep on hiding, they will say we’re not here.”

But one year into filming Call Me Kuchu and just three weeks after a landmark legal victory, on January 26, 2011, the unthinkable happens: David is brutally murdered in his home. His death sends shockwaves around the world, and leaves Kampala’s kuchus traumatized and seeking answers for a way forward.

With unprecedented access, Call Me Kuchu depicts the last year in the life of a caustic, courageous and brilliant man whose wisdom and achievements were not fully recognized until after his death. While heartbreaking, the documentary traces a narrative that takes the viewer beyond the chronicle of victimization depicted in international news media: it tells the nuanced story of David and Kampala’s kuchus as they work to change their fate, and that of other kuchus across Africa. A story told in his words, David Kato’s final testimony lives on in this film.