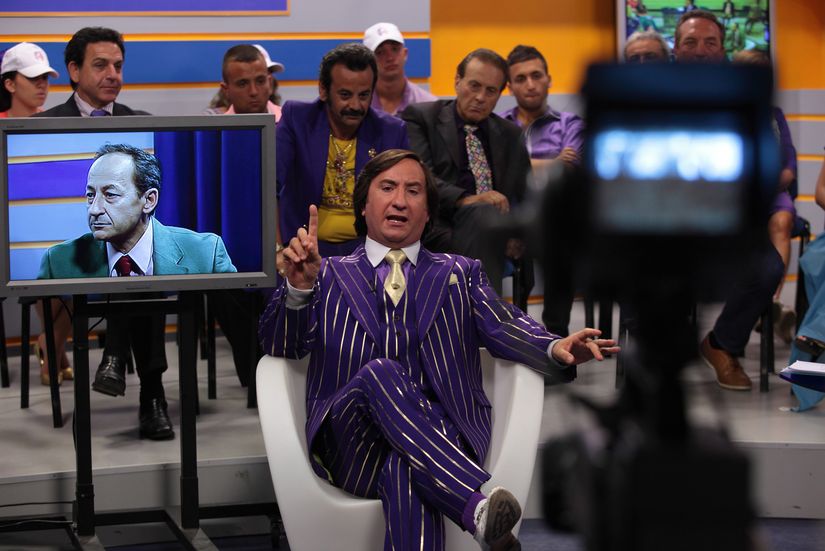 Cetto La Qualunque is a simple man. He simply wants everything and he doesn’t care how he gets it.

After a long ‘holiday’ abroad, he returns to his hometown in Calabria with a new girlfriend and theirdaughter, neither of whose names he can remember when he introduces them to his tormented wife Carmen and his disappointingly square son Melo.

While he has been away, a wave of lawfulness has swept into the town threatening his business interests. It seems he arrived home just in time... Giovanni De Santis, a dangerous civil rights activist, is running in the forthcoming mayoral elections. So Cetto, after long, tormented reflection in the company of very friendly women, decides to enter politics, whatever the price, and defend his town. Let the election campaign begin!

Cetto La Qualunque is a corrupt, depraved and ignorant businessman from Calabria who despises nature and democracy. Cetto is a womanizer who promises his supporters an abundance of ‘girls’ in return for their votes. His motto is ‘more beaver and concrete’.

The character was created by Antonio Albanese in 2003 as part of the RAI program NON C’È PROBLEMA (No problem) and achieved public acclaim in the program MAI DIRE DOMENICA (Never say Sunday).

He was a guest on the last season of Fabio Fazio’s popular program CHE TEMPO CHE FA (What’s the Weather).