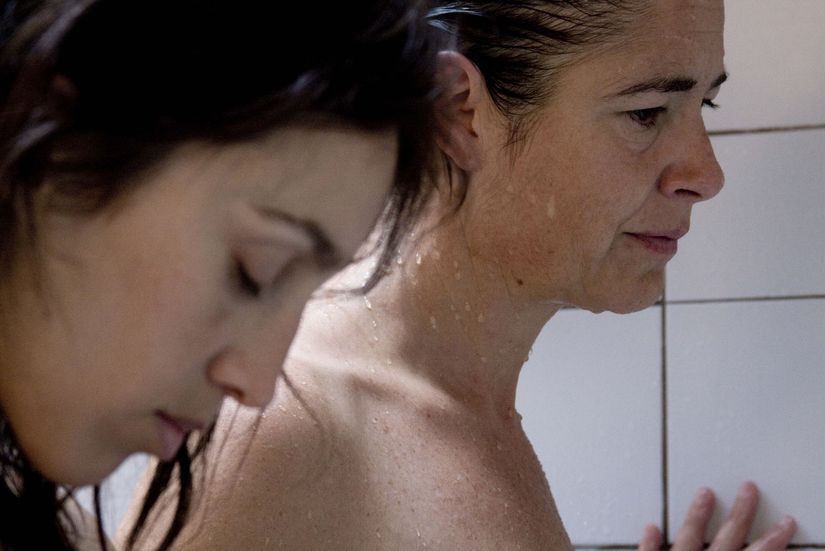 Maria José San Martín’s first film LA DUCHA is a reflection about love, about diverging paths and expectations, about leaving.

LA DUCHA is a chamber piece, set exclusively in the bathroom of a couple in which the older woman will stay, while her younger partner is moving away that day to pursue an opportunity abroad. Her departure has been well-prepared and agreed upon; still, the relationship is somehow unresolved, and there are many tensions, many things left unsaid below the surface. The formal reduction – both are naked, in a single room, and the action unfolds in real time – enhances their vulnerability and emotional need.

In this film, bodies express as much or more than the faces. The actresses’ bodies, as they approach, touch, caress, reject each other, are as important as their eyes, smiles or tears. Actions are magnified by their bodies’ meaning and their expressive power.

María José San Martín was born in Curico, Chile in 1974. Starting out as a stage actress, she eventually discovered the cinema and starts to work as an assistant director. Although she did not receive any formal education in filming, in the last seven years she has participated in the production of several of important recent works within Chilean cinema such as Play, LaBuena Vida, Kiltro, Huacho, Ilusiones Opticas, or Radio Carazon.

This is her first film as director, accompanied by Alicia Scherson (director of the acclaimed films Turistas and The Future) as co-author of the screenplay.