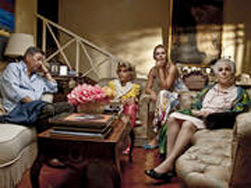 House husband Gianni has many things to worry about while his retirement slips by doing boring chores for his wife, mother, daughter and pretty neighbour. But romance is not one of them. One day his old friend Alfonso, inspired by his own surprising sexual escapades, decides it’s time for Gianni to get a girlfriend and reacquaint himself with some of life’s pleasures.

Gianni Di Gregorio was born in Trastevere in Rome, where he still lives and works.

His passion for cinema started when he was a child.  He spent his mornings at school and afternoons at the neighborhood cinemas, watching up to three films a day.

Originally enrolling at university to study modern literature, Gianni left before graduation to attend the Academy of Performing Arts in Rome to study with Alessandro Fersen. He subsequently graduated in theatre directing and acting and worked with various experimental theater companies.

After seeing Scorsese’s Mean Streets, he decided to leave the theatre and begin working in film as an assistant director, before moving into screenwriting.

In 2007, with Maurizio Braucci, Ugo Chiti, Massimo Gaudioso, Roberto Saviano and Matteo Garrone, he wrote the screenplay for the award winning film Gomorrah by Matteo Garrone.