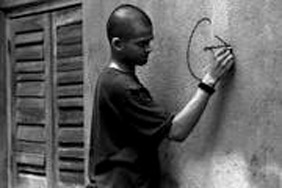 The Director Q and the actors Anubrata Basu and Joyraj Bhattacharya will be available for interviews on 16.02. and 17.02.

With GANDU, Kolkata-based director Q brings his provocative and stylish vision of urban life in contemporary India to Berlin. His characters are fully immersed in the gritty street life of a tough city, and the rap music driving the plot has very little to do with the Bollywood soundtracks generally associated with Indian movies.

Enthusiastically received at festivals such as Slamdance, GANDU has yet to be shown in India due to controversy over its scenes involving full frontal nudity.

Twenty-year-old Gandu, colloquial slang for “asshole” or “loser”, lives in a dingy neighborhood on the wrong side of the Howrah Bridge, the pride of Kolkata. One day, while turning a corner, he crashes into a rickshaw puller obsessed with Bruce Lee, who becomes his only friend. Gandu pours out his frustrations and desires to the rickshaw puller—especially his dreams of becoming a famous rapper. In turn, Rickshaw introduces him to heroin, blurring the lines between the grim reality of Gandu's life and a dark fantasy world. When his home life becomes unbearable, he and his friend Rickshaw hit the road for a psychedelic adventure in which rap lyrics and pornography melt into visitations by the Goddess Kali. Back in the city, Gandu's dreams seem to come true when he wins the lottery, has a Technicolor encounter with an alien sex kitten, cuts a demo album and opens for one of his favorite bands. Or has he completely lost touch with the reality of his life and succumbed to the illusions in his mind?

Q has worked in advertising for 12 years, directing over sixty mainstream media commercials. His last job was as Executive Creative Director, Ogilvy, where he worked on top brands leading brand development.

Driven by his love for Japanese and European independent cinema, Q moved back to Kolkata and started making his own films, developing his visually sophisticated, experimental and edgy style.

With a deep interest in myths, fantasies and alternate reality, Q is influenced by filmmakers and other artists who have accessed other paradigms through their work. Through Overdose, his production, design, and music company, he has produced a number of documentaries since 2001, many about music and youth culture. His last feature-length documentary, Love in India (2009), co-produced by ARTE, YLE, TV2 and SBS, premiered at Hot Docs Toronto. After BISHH (2009), GANDU is his second fiction feature.